So what if your corporate leaders could come down and look at one or two things that instantly gave them the “state of the company” in one fell swoop? And what if in doing so, they motivated everyone around them to become outstanding lean thinkers? Mind you, not the kind of “knot-in-stomach” motivation the Colonel used – real motivation, motivation that comes from the inside – the kind that makes everyone want to be the best at what they do. Real internal motivation to turbocharge any organization’s performance.

The clarion call of lean thinkers and implementers today is “we can’t get top management support,” let alone leader-led lean. And not one single lean expert seems to have an answer (at least not one that isn’t mushy and woo-woo like). And it’s not really the fault of corporate leaders. They just don’t know what to do. They’ve been swimming in the energy of command & control their entire lives and just don’t know anything but that.

Well now there’s a way. By applying the Colonel’s model to lean thinking, corporate leaders now have a way to touch the work in a way that makes them look brilliant while turning all the right knobs. But if the foundation isn’t discipline, what is it?

The Lean Pyramid of Performance

The foundational block of the lean pyramid of performance is knowledge of systems management. Mind you, we’re not talking about any complicated algorithms or formulas. Everyone knows systems management when they bring their car to the repair shop to replace a bad part – presumably the weakest point of the car at that moment. Once the new part is in, the car seeks out the next weakest point and applies the pressure and stress that you are passing along via your foot on the gas pedal. The car is a system and every part plays a role, together. So too are organizations systems, where every part plays a role. So sorting them into profit and non-profit centers makes no sense from a systems perspective.

GM learned some systems management the hard way recently, when the air bag and the ignition system, both of which worked ok by themselves, ended up malfunctioning when combined and landed in over 100 deaths. Price to GM? Shame, trust and reputation – the highest price known to man. 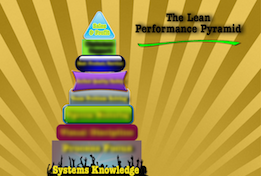 So the Colonel’s equivalent of discipline as the foundational block for lean executives, is systems management knowledge. All they have to do is show up where the work is and look for the manifestations of systems thinking. Are there silos of work in the form of process villages, still left over from the 1800s management technology that spawned them? Or are people working together as teams and cells? Do the metrics reflect old thinking by emphasizing one single aspect of the business over the others, or has the management team put real metrics that matter in place? Are different departments working together, or are they throwing proverbial molotov cocktails over the room dividers? These are all manifestations that any executive can see at a glance.

As you can see from the picture above, sales and profit are at the top of the pyramid. In the Colonel’s case it was keeping everyone alive in order to fulfill the mission, and in a way sales and profits are what allow an organization to fulfill its mission. And this is why Wall Street loves lean. The lean performance pyramid gives Wall Street something it desperately wants. It gives it stability and predictability.

More about that in part 3 of Lean Pyramid of Performance where we’ll look at the next building block and delve deeper into the connection between the pyramid and the stability/predictability factor.