There Is No Such Thing as Fake Lean

That’s right, there is no such thing as Fake Lean. The executive team and board are either convinced their Talent is an asset that can best be optimized by allowing workers to solve problems through systematized, team based problem solving; or they (along with Eli Whitney), think that workers are easily replaceable and are to be viewed as a cost controlling line item. And as long as the latter is in place, no Lean implementation is ever going to stand a chance, because it’s really just the Commander Management mode (as popularized by GM’s Alfred Sloan) continuing its addiction to Commander Management crack, using any tool available to cut costs. That’s most certainly not Lean in any way shape or form. But it is the reason so many attempts at Lean have lacked that ever elusive “top management buy-in,” and it’s the main reason any attempts at getting there were doomed before they even got started.

Granted Bob Emliani, a professor who writes about the history of Lean, coined the term to highlight that many implementations were being called Lean, but were in fact not. He was making the point, rightfully so, that most of the implementations were focused on Continuous Improvement (and tools) and completely missing the Respect For People principle. Which basically starts with leaders viewing the Talent as a tremendous asset rather than another budgetary line item. The fact that previous Lean implementations failed has everything to do with leaders not viewing the Talent as an asset. They never understood what was being asked of them.

There are numerous reasons why they didn’t understand it, from a lack of real knowledge about Lean in general (which Professor Emiliani was trying to rectify), to managements’ hands-off attempts to cut costs with the “newest tools crack,” to a myriad of poor solutions offered by the consulting community (a few of whom adopted Lean to fit their own agendas). Regardless of the reason, all that really happened is a failure to get it right, which is different than using a derivative of Lean that is not real.

Continuing to call those attempts Fake Lean is the equivalent of calling medical treatment of the past, Fake Medical Practice. Just because doctors in their day had to amputate (without anesthesia) in order to save lives, does not mean it was not real medical practice. It only meant we were lacking knowledge about how to do it better. And so it has been with previous attempts to become Lean. 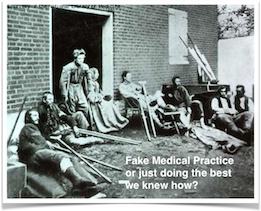 Previous misapplications were due to a lack of knowledge, the reasons for which are irrelevant. We do know now what has to happen in order to move an organization from Commander Management to Lean Management. What is relevant is that we as a Lean community move forward together, working toward the goal of getting each and every company that is even slightly interested, to adopt Lean thinking as quickly and as gracefully as possible.

Unfortunately for the Lean Consulting community, the many failures have led to an ongoing conversation about what is and what is not Lean. “Fake Lean” even appears to be a weapon to wield by some, implying they know what Lean is, while others are propagating something less than. Dr. Deming’s teachings about competition in systems seem to have been skipped over, along with basic industry professionalism. We, the Lean implementation community, are all in this together and it behooves us to work together rather than act individually for self-aggrandizing purposes. Clients find it confusing, albeit amusing that consultants spend so much time discussing “their grasp of Lean” over everyone else’s. Those who are serious just want to get there as fast as possible, and they’ll take as much of what is available to get there. People don’t just check out one book at the library – they check out as many as they think they need.

Which is to say, we live in a world of abundance. There is an entire army of leaders coming into their own who will be working hard to implement Lean. There aren’t enough consultants in the world to handle the many companies that will be needing help soon, let alone consultants who understand how to gracefully implement Lean. We really ought to be looking at ourselves as a unified group and figure out how to work together as much as possible, rather than attacking because we mistakenly think the “Lean pie” is small. Even if you think that pie is small, let’s work together to expand the pie. This is not a zero sum game – it’s an expansive one with lots of win-win-win all around. To us, to clients, to the workforce at large, to society and to humankind.

And while we’re speaking about clients, some of them, due to the many misapplications, are going to scream and shout about how Lean doesn’t work (or apply to their work). That’s par for the course for any Lean consultant who is involved in implementations. As a sales manager at a Fortune 100 company, a veteran salesman told me that if I had not been thrown out of a prospective customer’s office yet, I wasn’t making enough sales calls. The lesson? You’re going to get thrown out of a prospects office; don’t fret it. So too with those who choose to raise their hands and say Lean ain’t workin’. That’s part of change. You’re going to get some people who yelp. Don’t fret it.

Ultimately, that’s the business we’re in. Ray Croc famously surprised everybody by announcing “Ladies and gentlemen, I’m not in the hamburger business. My business is real estate.” Lean consultants and implementers are in the business of change. Lean is the content and the target, but we are in the business of getting human beings to change, both individually and collectively. That’s what implementing Lean is all about. Attacking someone for not wanting to change is the opposite of what change agents do to get someone to change. Instead, as Professor Emiliani aptly pointed out, we want to be asking questions and adjusting ourselves, just as PDCA requires. We do everything perfectly to get the results we’re getting, so if someone is boldly calling Lean BS, it’s because WE CAUSED THAT. They’re just reacting the way humans react. Don’t fret it. But certainly don’t lambast them for it.

It’s not like we don’t know where this is going to land either. A Toyota is coming soon to each and every industry, so who cares if two doctors write an article about what they think is happening. There are reams of doctors who are going to come forward to call BS on that. My friend John Black received a message from one such doctor, who pretty much accredited Lean with helping him save a child’s life, just last month. You think that Dr. is not gonna say “excuse me, but we’ve seen some pretty amazing results from Lean in our hospital.”

In the end, ask yourself, so what? A couple of dinosaurs are roaring as they gasp their last breaths. They’ll either adapt or be gone. That’s very clear. When paradigms shift, everyone goes to zero, and Lean is the biggest paradigm shift of them all – a better management technology than anything we’ve ever seen or experienced. As part of the Lean Leader community, you know this, so as Thick Face Black Heart says, “exercise your ability to ignore criticism, ridicule or vilification from others, and, at the same time, carry out your duties as you see fit.” The writing is on the wall, a Lean company will do to every single industry, what Toyota did to the auto industry, so don’t fret it.

This transition is after all, the greatest thing that has ever happened to the human race. If you view mankind as growing from infancy through childhood and into the teenage years, Lean Management represents our entry into early adulthood. And as Lean Leaders, we all play an important role in getting there, even if the road has been somewhat bumpy. And dusty. And winding. But definitely not fake.

Jim, I agree there is no fake lean. I can’t agree on your ability to assess brilliance, however! Some people have blinders on, and can’t see past their lane. Thanks for the thought-provoking article!