This Makes it Impossible to Hide Problems

Because we just introduced a new training (Instant Lean Leadership) to overcome the number one issue that plagues most lean implementations (no top management support) — you now have the capability to move up the pyramid faster than was ever possible. That means you can do what Danaher has done in each of the industries it competes: Use lean management as a strategy to become number one.

Because Instant Lean Leadership is built around each block of the pyramid, your leaders will already know how to assess each block, and they’ll know how to make sure that each one is solidly present in the organization. Unlike the Colonel, your C-Suite won’t have to just examine the bottom block to know everything’s ok, they’ll have deep knowledge of each block and lead the charge to install them quickly. Instant Lean Leadership delivers that by implanting the two high beams of elegant change – belief shift and new behaviors. You definitely want this for your lean implementation.

Ask a process thinker who understands system management to build a platform where problems are highlighted, and they not only understand the value of that platform, but they also understand that its reason for being is to improve the processes. The problems are nothing more than a symptom of a broken process. What’s needed is a way for the symptom to call out our names loudly, saying “oh, oh, I am broken, please fix me right away.”

Now comes the problem solving team, in the form of as few or as many people as it takes to get the problem fixed right away. The foundation for that problem solving? Surely you guessed it – a consistently executed process. If we’re going to analyze what led to variation in the process, we have to know for sure that the process was consistently repeating itself up until the variation happened.

This means we have to know the equipment was under control and nothing major changed it; that the normal method was followed and executed as usual; that the material did not undergo some big changes; that our measurements haven’t changed for some reason; and finally that the person doing the work is trained properly and fully present. That is the starting point of any sophisticated problem solving effort. Of course you might now wonder, how do we achieve that consistency each and every time, so that we have the basis for effective problem solving? The answer is the next building block on the Lean Performance Pyramid. 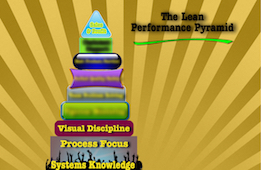 Just as the Colonel knew discipline to be the key to all other military performance, so too does scientific management depend on it. But not from the same martinet perspective as the Colonel’s take on discipline (and certainly no drill sergeants involved). No, this is the discipline of making sure the processes are executed consistently. That’s a voluntary discipline we’re after, and to make it easy to remember its importance, we want to be reminded anytime it’s being violated.

Human beings make mistakes. This open acknowledgement serves to remove any other labels that might be conjured up. In order to keep those mistakes from intermittently adding variation to our consistent processes, we have to implement a way to lock our processes in, while locking the potential for mistakes out. And the very best way to do that is visually.

That means the process itself ought to be visually mapped out, using the floor, the walls, furniture, the ceiling, signs and anything else available to make it so easy to do the procedure, a new hire can follow in less than two tries without guidance. This is not to suggest we not train new hires extensively to perform world class work; but rather, to specify just how detailed the visual management system needs to be. Make it so visual that any outside visitor can spot a mistake or a problem. That’s the goal.

The keyword to visual management is the word management. Let this visual system do the grunt work of managing, by enforcing the disciplined execution of the processes. Rather than tasking managers with the mundane task of enforcing discipline, as the Colonel thought it was every manager’s job to do, let the teams enforce the discipline themselves by making it impossible to hide infractions. That’s the meaning of visual discipline, and it is one of the most important building blocks of an excellent lean culture. Get this right, and 90% of a lean transformation is now on the extreme fast track.

Part 5 of the Lean Pyramid of Performance will delve into another exciting next level of the building blocks of lean performance. Sign up below to stay tuned for that, and make sure to check out the new course, Instant Lean Leadership while you’re here.