Step 2 for Your 5S Transformation

A friend of mine told me his clients frequently complain when he insists on spending most of his time on 5S, claiming they already know how to do it. To which he replies, if you did, then it would be done and it’s not, so you don’t. And, he goes on, if you can’t use this simple management tool, then you won’t be able to do the harder things that are coming as you transition your way into Lean thinking.

5S is actually even more powerful than that – as stated in the last post. 5S is a a behavior modification program that lays the foundation for everything to come. The last post also stated that you can use it to drive some very deep principles into the participants. The second tip involves making sure that your 5S is easy to sustain, the fifth S.

During step four of 5S – the systematize/standardize step, tell the team to build the entire process into the landscape visually. That means use colors, pictures, labels and any visual means necessary to make the process for that operation so visually clear, as to allow a complete neophyte to be able to follow the process within minutes. They don’t have to be able to do the operation as fast as an expert of course, but they have to be able to complete it, just by following the visual cues. Any point where an outsider gets stopped due to confusion is an indicator it’s not visual enough.

What you will have done, assuming you included the last tip into your 5S and are now using this one, is to have incorporated the essence of Lean thinking (emphasis on the value add) into the process, and locked it in visually in order to standardize it. There’s more to do in step four to standardize, like reducing the number of tools needed by standardizing bolts and screws etc., but by including this visual management technique into step four, you’ll have made step five, sustaining the new platform, much easier. 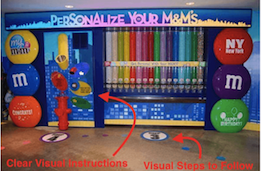 The human brain wants to put things back where they belong and it wants to follow the right steps. Incorporating excellent visual management as outlined here, insures you get that instilled up front. That doesn’t mean things can’t change when they’re improved; on the contrary, great visual management actually serves as a platform to identify what needs to be improved. Because anyone (even those who are just visiting) can tell when the standard process is not being followed because of the visual cues, everyone will know right away. And as the team gets more comfortable with this cycle, they will push to lock the new improved processes down visually, each and every time.

Do these two things during your future 5S’s to turbocharge their effectiveness beyond anything you’ve experienced in the past.